Alabama is headed to the College Football Playoff for the fifth straight year, and this time they did it in one of the most dominant regular seasons in recent memory. In fact, their dominance brought up comparisons to one of the most dominant college football teams of all time, the 2001 Miami Hurricanes.
We'll never actually know who's better since they can't play each other, but we can take a look at their stats to make our debate have some legs. 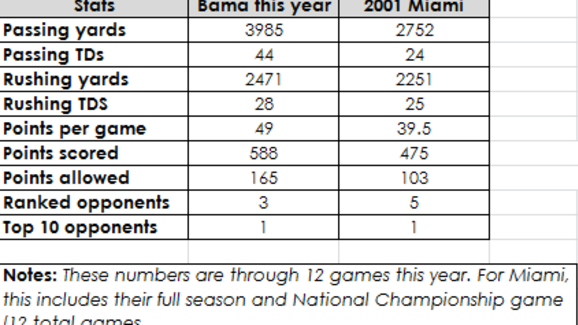 As the graphic shows, this only includes Bama's 12 regular season games and did not yet include the game against Georgia -- this is because the Hurricanes only played 12 games in their 2001 championship season. As you can see, Alabama has the lead in every single offensive category while Miami takes the defensive side of things.

The overall case for Miami at the moment is predicated on two things -- the amount of NFL talent and quality of the competition. After knocking off Georgia, Alabama has four ranked wins and two Top-10 opponents. If the Tide win the National Championship, they'll increase those numbers to six ranked-wins and four Top-10 opponents, giving them a lead in nearly every statistical category here. Unfortunately, we won't know about the NFL talent angle for years to come.

Miami was incredible, but due to an offense that wasn't as dominant as Alabama's was this year, they played a couple close games against Boston College and No. 14 Virginia Tech. The only close game the Tide have played so far was the SEC Championship.

These stats are certainly impressive for Alabama, but they do have to finish the job to have a real claim at the title of best college football season ever. Miami took out Nebraska in the Rose Bowl to clinch their title.

If Alabama can't win the playoff then Miami keeps the crown, even if Bama has the better statistics.