It might not feel like it just yet, but it's officially hockey season. Fall is finally upon us, and there will soon be all four American professional sports leagues running at the same time. Oh, what a time to be alive.

While the Hart Trophy for MVP might be the most appealing of the postseason hockey awards to bet on, there is also the option of taking a look at the Calder trophy for the Rookie of the Year, and there are plenty of viable options heading into the season. 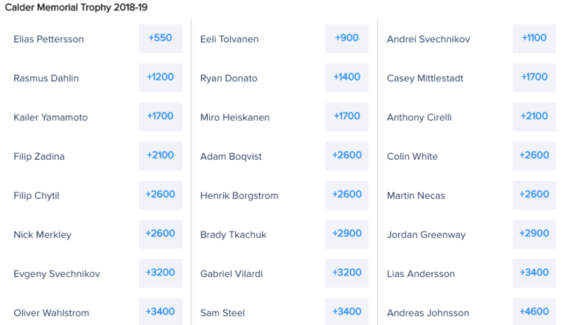 Vancouver Canucks rookie Elias Pettersson has jumped in the lead just a couple games into the season on the strength of three goals and two assists in his first two career games in the NHL. The 19-year-old from Sweden has been electric to start the season. If he continues playing at this level, he's a lock for the Calder Trophy.

However, he does still have some competition at the top. Eeli Tolvanen (+900) of the Predators is an impressive young player and Andrei Svechnikov (+1100), the second overall pick in the 2018 draft for the Carolina Hurricanes, has one goal and two assists through three games.

Pettersson has the early lead, but it's anyone's title to win now with nearly 80 games left to play.