It doesn't take a lot of insight to recognize a team's latest probability of winning the College Football Playoff from simply reading a singular list of the latest playoff odds from Week 9.

But if you're looking to make the best value wager, you're going to have look behind the scenes at who is trending upward just enough to actually win, as well as those falling just a tad bit too far to have a real chance of winning.

Despite both teams experiencing regressions in odds from Week 6 and Week 7, Texas (+5000) and Florida (+10000) have to be the two hottest and best value contenders for odds to win the College Football Playoff right now. 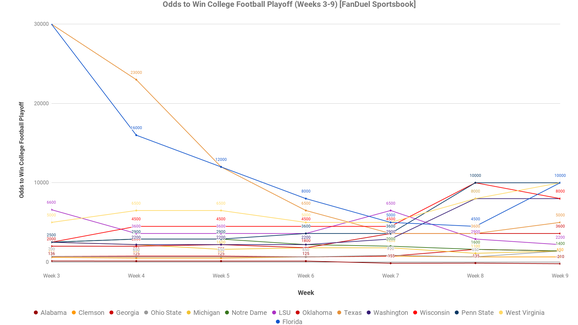 Rewinding back to Week 3, both Texas and Florida were staring at +30000 shots to win it all, but each team's betting stock starting flying between then and Week 8, leaving the Longhorns at +3600 and the Gators at +4500.

If you're going to bet on the Longhorns or the Gators to run the college football table, this will most likely be the last week to get them at their best value to do so, especially for Florida. Even though the Gators were on bye in Week 8, they still got hammered by the sportsbook's confidence, dropping from +4500 to +10000 as a result – seems excessive. 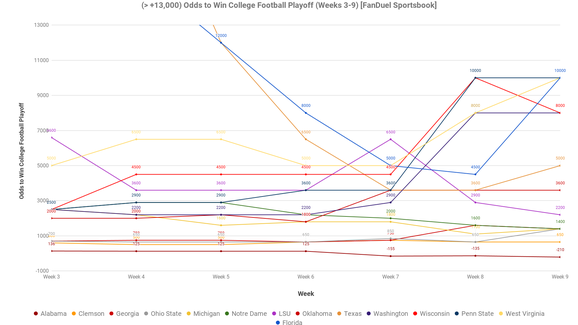 The Gators face No. 7 Georgia (+750) in Jacksonville for a shot at first place in the SEC East and ultimately a chance to play an Alabama or LSU in the SEC Championship for a presumable playoff bid.

David Hayes is not a FanDuel employee. In addition to providing DFS gameplay advice, David Hayes also participates in DFS contests on FanDuel using his personal account, username DavidWHayes. While the strategies and player selections recommended in his articles are his personal views, he may deploy different strategies and player selections when entering contests with his personal account. The views expressed in their articles are the author's alone and do not necessarily reflect the views of FanDuel.