Lunar Eclipse Could Occur During Chiefs vs Patriots AFC Championship

As if the AFC Championship game between the New England Patriots and Kansas City Chiefs needed any more intrigue, the two teams could end this game playing under a Blood Moon Lunar Eclipse.

There are already expected to be some frigid temperatures at Arrowhead Stadium, but this would add an extra element of uniqueness to such a mega-matchup.

National Weather Service is projecting an arctic blast to settle over Kansas City for Sunday's AFC Championship Game vs Patriots, reports the @AP_NFL . Temperatures at kickoff could range from 10 degrees to well below zero, making it the coldest game in Arrowhead Stadium history.

It'll take some magic from Mother Nature for the Total Eclipse to happen during the game, because that phase isn't supposed to take place until 10:41 p.m. CST. The game kicks off at 5:40 CST, so the odds of a five-hour game are low.

Lunar Eclipse Diagram/Phases of the Moon 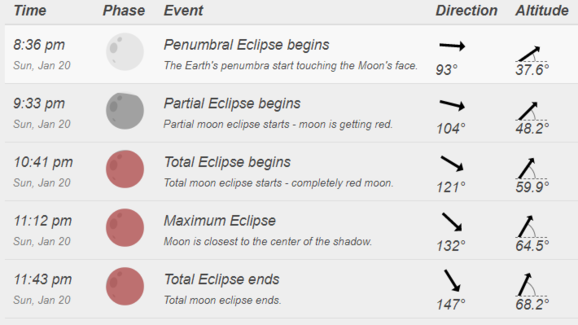 But doesn't it seem like all the stars are aligning (pun intended) for a red-colored moon to be present when the Chiefs have a chance to go to the Super Bowl?

It will certainly make for some memorable photo ops if the Chiefs are indeed celebrating under the red-colored Lunar Eclipse.

Sunday January 20 as the Patriots-Chiefs game ends, a #LunarEclipse will begin. This will be only the second time an @NFL game was played during a lunar eclipse. What was the other? (Unfortunately it was under a dome and so fans couldn't readily see it). pic.twitter.com/SUb0YWDi25

FanDuel Sportsbookhas dubbed KC as three-point favorites as the home team. We'll see if they are celebrating after the game with a blood moon or their season ends in disappointment.

Al Walsh is not a FanDuel employee. In addition to providing DFS gameplay advice, Al Walsh also participates in DFS contests on FanDuel using his personal account, username 14AdotWalsh. While the strategies and player selections recommended in his articles are his personal views, he may deploy different strategies and player selections when entering contests with his personal account. The views expressed in their articles are the author's alone and do not necessarily reflect the views of FanDuel.