The name of the game is scoring. Everyone knows that, but we're seeing it at an incredible rate.

In the first month of the season, there were only three games where neither team scored 100 points. 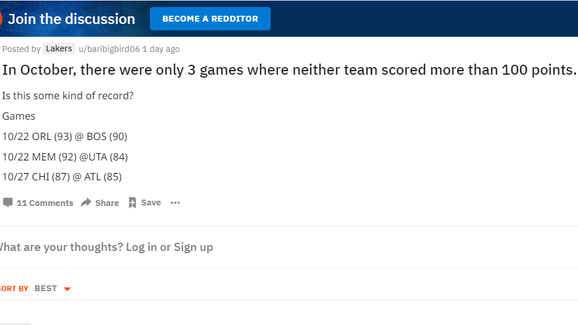 Lots of games were played and only three teams didn't see triple digits. That's insane. Those who like ​betting the over must be smiling from ear to ear.
​
​It's surprising to see Boston and Utah not get up to 100 points, but the other teams there are some of the worst of the worst in the league. Even so, all of them are averaging more than 100 points per game.
​
​The best in the league were expected to score a ton of points, but the entire league is scoring at an unprecedented pace.

After two weeks of competition, NBA teams are averaging 112.3 points per game. That's on pace to be the highest-scoring season since 1970-71, and it would go down as one of the 10 highest-scoring campaigns in league history: pic.twitter.com/Swd0ECqGV3

If you like defense, go watch ESPN Classic. You won't see any of that in today's NBA.