Tagovailoa will cruise to the Heisman title.

SB Nation's Bill Connelly compared Tua's stats to those of the last eight Heisman winners and the result is unbelievable. 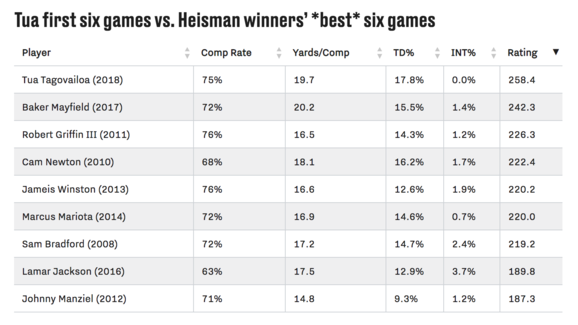 Connelly's list didn't just compare each player's first six games. For the non-Tua quarterbacks, it is their six best games from that season. So even if you opt to use the best games from the recent Heisman winners, Tua still blows away nearly everyone.

The scary thing is, if Alabama went all out for the entire game with Tua under center, he could be even further ahead on this list. Remember he's doing this while only throwing the ball 17 times per game. That's next-level stuff.