All of those "Drew Lock to the Mile High City" talks could be put on hold for a moment, as qbeen traded to consideredgame-manager

For one, it means the Broncos are moving on from QB Case Keenum, or at least that's the assumption. The former Houston Cougar threw for 3,890 yards with 18 touchdowns and 15 interceptions in Denver last year.

The trade also means Phillip Lindsay and Royce Freeman will remain the focal points of the Broncos' offense. Lindsay dominated the Denver backfield last season with 1,037 rushing yards and 9 touchdowns, while adding 35 catches for 241 receiving yards and a receiving touchdown. If you thought Flacco's presence would mean fewer touches, think again. Lindsay and Freeman should still be the focal points of the offense.

The reason is, Flacco has never thrown for 30 touchdowns in his career and only exceeded 500 pass attempts six times over his 11 NFL seasons. He was built for a run-first offense. Flacco's best season was 2014 when he threw for 3,986 yards and 27 touchdowns.

The Broncos still owe Keenum $6.5 million guaranteed. The Ravens have $16 million dead money in Flacco. Tannehill and Bortles are next up to get dumped but still hurt their team in 2019.

Perhaps the biggest question is how this move will affect the production of wide receivers Emmanuel Sanders and Courtland Sutton. Flacco can still throw the deep ball with the best of them, and that's likely where each of these guys thrives with their new quarterback.

Sanders has missed four games in each of the last two seasons and is coming off a torn Achilles, so he's facing an uphill return and there are even rumors of him being traded. Sutton made some decent strides in his rookie year, but he only caught 50 percent of the 82 targets thrown his way for 704 receiving yards and four touchdowns. 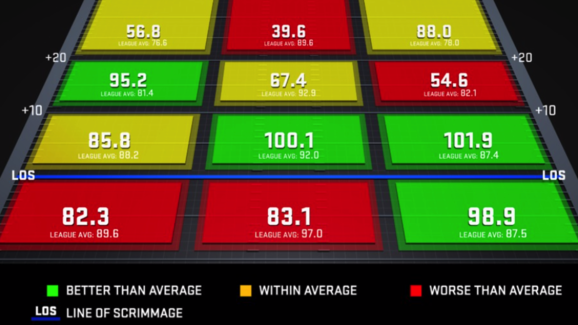 All in all, Flacco probably won't make for anything more than a streaming starter in favorable matchups. His lack of touchdown passes and mobility are the glaring weaknesses, but when you add in the fact that he'll be playing with new teammates in a brand-new offense, this is a situation you want to avoid in standard 12-team formats.

Al Walsh is not a FanDuel employee. In addition to providing DFS gameplay advice, Al Walsh also participates in DFS contests on FanDuel using his personal account, username 14AdotWalsh. While the strategies and player selections recommended in his articles are his personal views, he may deploy different strategies and player selections when entering contests with his personal account. The views expressed in their articles are the author's alone and do not necessarily reflect the views of FanDuel.