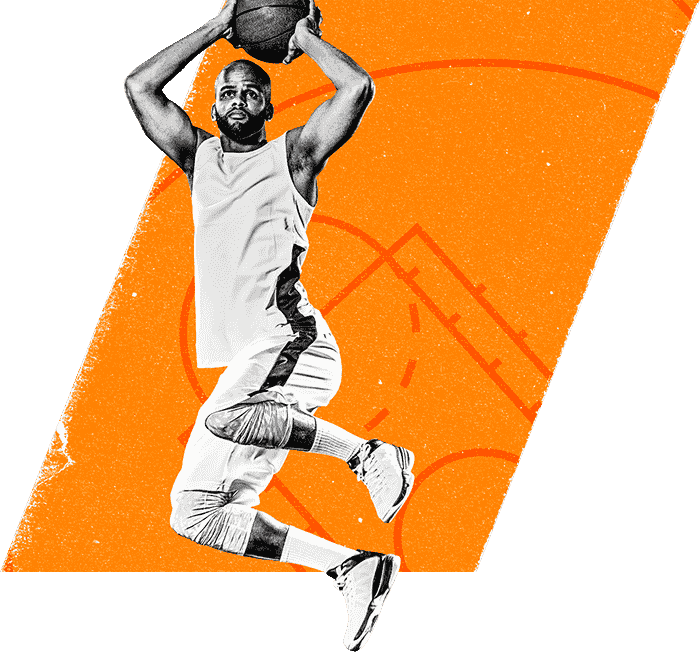 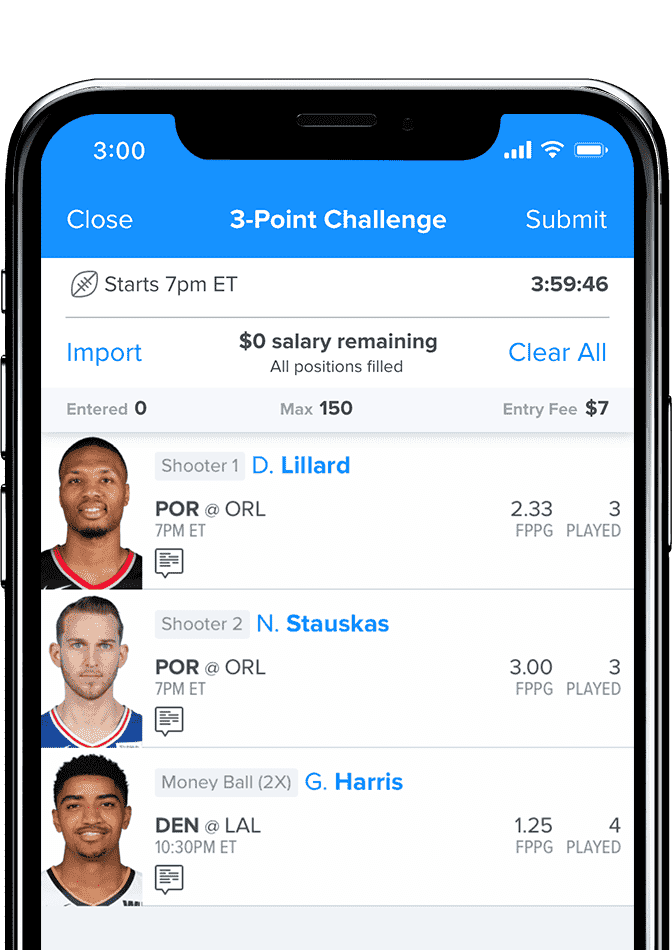 The 3-Point Challenge is free to play every night from 10/30-12/1. Just pick 3 shooters, and get 1 point for each 3-point shot they make. Be extra selective with who you put in your Money Ball slot though, that player will earn you 2X points.

Welcome to the "3-Point Challenge" promotion (the "Promotion") by FanDuel. Here are the detailed rules for the Promotion.

By participating in the 3-Point Challenge, you agree that FanDuel may provide your name and e-mail address to the NBA and that the NBA may use this information for marketing and advertising purposes in accordance with its own policies.

By participating in the Promotion, each participant accepts and agrees to accept and be bound by these Terms and Conditions and by the decisions of the FanDuel, which shall be final and binding in all respects. No transfer, assignment, cash redemption, or substitution of prize (or portion thereof) is permitted except by FanDuel who reserves the right to substitute a prize (or portion thereof) with one of comparable or greater value as determined by FanDuel.

Except where prohibited by law, a prize winners’ acceptance of a prize constitutes permission for the Released Parties to use that prize winners’ name, photograph, likeness, statements, biographical information, voice, and address (city and state) worldwide and in all forms of media, in perpetuity, without further compensation. Prize winners agree to Released Parties’ use of their names and likeness for advertising and publicity purposes, without additional compensation, unless prohibited by law.

The Released Parties and their parents, affiliated and subsidiary companies and advertising and promotion agencies are not responsible for lost, incomplete, inaccurate, garbled, late, delayed, undelivered or misdirected downloads, installations, registrations, usernames, scores, NBA player selections or revisions; theft, destruction or unauthorized access to, or alteration of, NBA player selections; failures or malfunctions of phones/mobile devices (including wireless phones/handsets or other wireless devices), phone lines or telephone systems; interrupted or unavailable network/mobile app, server or other connections; any error, omission, interruption, defect or delay in any transmission or communication; traffic congestion on the Internet or for any technical problem, including, but not limited to, any injury or damage to participant’s or any other person’s computer or mobile device related to or resulting from participation in this Promotion; errors or ambiguity in these Terms and Conditions, in any Promotion-related advertisements or other materials; the selection or announcement of potential winners or the distribution of prizes; the cancellation, suspension or preemption of NBA games, injuries or other unavailability of players, scoring tabulation or timing errors or other problems or errors of any kind whether mechanical, human, electronic, typographical, printing or otherwise. By entering, each participant agrees that the Released Parties and their parents, affiliated and subsidiary companies and advertising and promotion agencies shall have no liability and will be held harmless by participant for any claim, action, liability, loss, injury or damage (1) to participant or any other person or entity, including, without limitation, personal injury or death to participant or any other person or damage to personal or real property, due in whole or in part, directly or indirectly, by reason of the acceptance, possession, use or misuse of any prize and any travel or travel-related activity thereto or participation in the Promotion, and (2) any and all taxes and other fees applicable to the prizes received by the prize winners. The Released Parties, in their sole discretion, reserve the right to: 1) disqualify any person (and void his/her points) who tampers with the submission process, the operation of the Promotion, or any other component the Promotion, or who is otherwise in violation of these Terms and Conditions; and 2) modify, suspend or terminate the Promotion (or any portion thereof) should virus, bugs, non-authorized human intervention or other causes, including but not limited to war, strikes, and/or acts of God, corrupt or impair the administration, security, fairness or proper play of this Promotion. The Released Parties reserve the right to halt or modify the Promotion at any time during the Promotion Period if events beyond its control compromise the Promotion’s fairness or integrity. CAUTION: ANY ATTEMPT BY A PARTICIPANT TO DELIBERATELY DAMAGE ANY WEB SITE OR UNDERMINE THE LEGITIMATE OPERATION OF THE Promotion IS A VIOLATION OF CRIMINAL AND CIVIL LAWS AND SHOULD SUCH AN ATTEMPT BE MADE, RELEASED PARTIES RESERVE THE RIGHT TO SEEK ANY AND ALL REMEDIES AVAILABLE FROM ANY SUCH PARTICIPANT TO THE FULLEST EXTENT PERMITTED BY LAW.

The Released Parties reserve the right to modify these rules for clarification purposes without materially affecting the terms and conditions of the Promotion. This is a Promotion designed to increase consumer awareness of and interest in the Released Parties’ service.

In the event of a tie, tied participants will split the cash value of the prize for the tied finishing positions.

NBA Properties, Inc., the National Basketball Association (the “NBA”), and the NBA member teams is defined as collectively (“NBA Entities”). Employees, officers, directors, representatives and agents NBA Properties, Inc., Turner Digital Basketball Services, Inc., NBA Media Ventures, LLC, the National Basketball Association and its member teams and each of their respective parent companies, subsidiaries, affiliates, officers, governors, owners, wholesale distributors, retailers, advertising/promotion agencies and teamDigital Promotions, Inc. (collectively, “Released Parties”), and the immediate family members (parent, spouse, sibling or child and their respective spouses, regardless of where they reside) and those living in the same household of each, whether or not related, are not eligible to participate or win a prize in the 3-Point Challenge.

In regard to the “NBA Entities”, participants in this promotion agree to be bound by these 3-Point Challenge terms and agree that the NBA Entities and their designees and assigns may use the participant’s name, voice, city/state of residence, photos, video or film clips, and/or other visual likeness for advertising and/or trade purposes and/or for any other purpose in any media or format now or hereafter known without further compensation (financial or otherwise), permission or notification.

All US and Canadian residents who are 18 years of age or older (21+ if in MA) and comply with FanDuel's eligibility rules for free entry games in FanDuel's Terms of Use are eligible to win a prize as part of this Promotion. FanDuel employees may enter the competition for testing purposes but are not eligible to win any prizes. Employees and operators of other daily fantasy sports sites are not eligible for this Promotion.

All US resident prize winners will be required to provide address and social security details prior to receiving their prize if their prize exceeds $600 in value. Winners are responsible for paying all taxes, fees, registration and insurance, for any prizes won in connection with this Promotion.

The decisions made by FanDuel regarding, but not limited to, eligibility, winners, scoring, rules, prizes and compliance are in accordance with FanDuel's Terms of Use. No correspondence will be entered into. FanDuel reserves the right to make reasonable changes to these terms, (a) to ensure the fairness of competition, and (b) in response to unanticipated developments (such as technical failures, errors, acts of God, natural disasters, terrorism, changes in applicable law, interruption in the NBA season, failure of stats provider, and failure to obtain a minimum number of entrants).

I agree to refrain from any behavior or communication during the 3 Point Challenge Promotion that would harm the image or reputation of FanDuel, or the FanDuel user community.